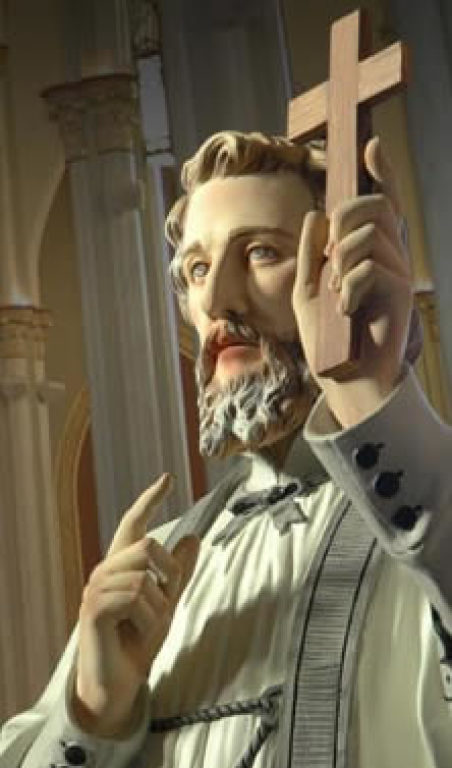 WHO WAS ST. FRANCIS XAVIER?

Francis was born April 7, 1506 in the Basque area of Spanish Navarre and later studied in Paris where he met Ignatius of Loyola. He was ordained as a Jesuit priest in Venice, 1537, along with Ignatius. He spent his life as a missionary in the East and Near East. He set out for China, which he had always dreamed of evangelizing, in 1552 in sight of the goal he was never to reach. Francis, with the exception of St. Paul, was the greatest of all Christian missionaries. He traveled thousands of miles to the most inaccessible places under the most harrowing conditions at a time when transportation means were still primitive. His converts are estimated to have been in the hundreds of thousands and his missionary impact in the East endured for centuries.

Working with inadequate funds, little cooperation, and often actively opposed, he lived with the natives and won them to Christianity by the fervor of his preaching, the example of his life, and his concern for them. His miracles are legion, and his conversions are all the more remarkable in view of the fact that, contrary to a belief long held, he did not have the gift of tongues but worked through interpreters. He was called “the Apostle of the Indies” and “the Apostle of Japan,” was canonized in 1622 by Pope Gregory XV, and was proclaimed patron of all foreign missions by Pope Pius X. The Feast of "St. Francis Xavier is December 3."

In the summer of 1890, Bishop John Joseph Hogan decided that a parish should be organized in the Wyatt Park subdivision of St. Joseph which was on the eastern edge of the developing city. The Bishop chose the Society of the Precious Blood of Carthagena, Ohio to build the church and to found and maintain the parish. Given the name of St. Francis Xavier, the parish was formally organized on September 17, 1890. The original church, school and rectory were dedicated on June 14, 1891. The first pastor was the Reverend Seraphim Kunkler, who remained until the Reverend Louis Hefele came in 1899.

It was Father ‘Louie’ who was largely responsible for the appearance of the parish as we know it today. In 1906, he added the present rectory, which was then often called the Mission House, as missionaries passing through the area were welcome to stay. The present church, a Gothic structure designed by the well-known local architect, E.J. Eckel, was dedicated in February of 1909. In spite of the tight financial situation brought on by the Great Depression, the new school was dedicated in the fall of 1934. An addition to the school was made in 1961. A new convent was completed in 1949 and was converted to the Early Childhood Center in 1976.

With the conclusion of Vatican II in the mid-60’s churches were asked to update their sanctuaries in keeping with the mandates of the council.The interior of the church underwent a major remodeling in 1971.The long-desired Parish Center became a reality in 1988 which provided needed space for parish gatherings. In 1994 an addition to the rectory was completed which provided more space for parish offices and more privacy in the living areas for the priests. For over one hundred years, we have been an active, Catholic, family-centered community. When parish life began back in 1891, forty families composed the church membership; today the parish includes almost 1100 families. Instead of the one multipurpose building, there are now five buildings. Even in its early days, it was obvious that the parish enjoyed an especially vibrant and vigorous life. Perhaps most notable among its many attributes was its devotion to God, a concern for others that extended beyond the welfare of its children and its poor to include its entire membership, great generosity of spirit, and a strong sense of community. Today, despite its growth and despite the changes that have occurred in the world around it, the parish has retained, and added to, its early strengths. 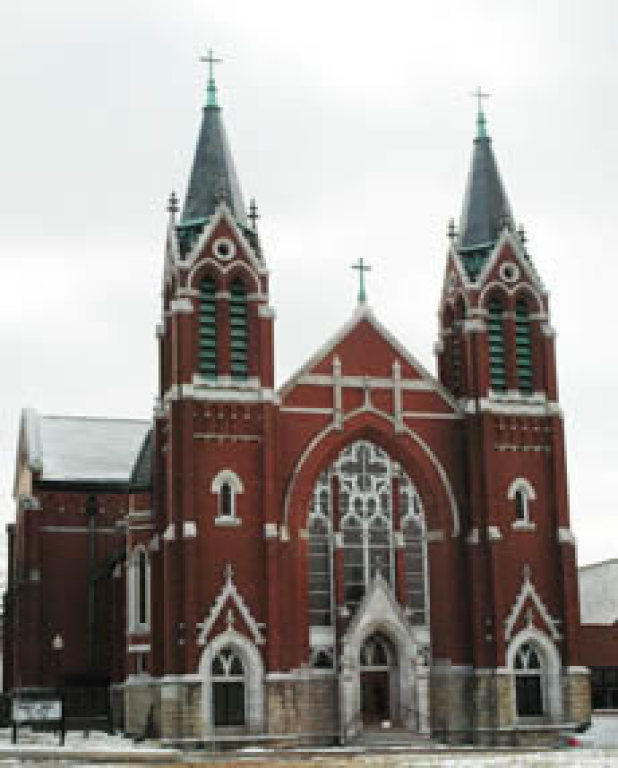 HISTORY OF THE SOCIETY OF THE PRECIOUS BLOOD

The Society of the Precious Blood was established by a man later to be known as "St. Gaspar del Bufalo on August15, 1815 in Giano, Italy. As a small child in Rome, where he was born in 1786, Gaspar had a couple of very serious illnesses. During the second illness, his mother placed him under the protection of St. Francis Xavier. After his recovery and while still a small child, Gaspar became imbued with devotion to St. Francis and developed a strong desire to become a missionary himself. He became a student at a seminary and by 1808 was ordained a priest. In the following years, his spirituality increased after time spent imprisoned and in exile, separation from his family and serious illness. Pope Pius VII asked him to devote his life to conducting missions and Gaspar agreed. The idea of founding a mission organization to work toward renewal within the Church developed in his mind. After a retreat that he and his friends made in 1815, during the days preceding the Feast of the Assumption, Father Gaspar established the “Congregation of the Missionaries of the Precious Blood.” For the rest of his life, Gaspar was involved in preaching missions and in opening mission houses in and around Rome. He died in 1837 after many years of suffering and more than a year of illness. He was canonized on June 12, 1954. In January, 1844 Father Francis de Sales Brunner, accompanied by seven other priests, one brother, and six students opened an American mission in Ohio. The Society grew rapidly and by 1864 its members were actively engaged in many parts of the United States. They first came into Northwest Missouri in 1870. They now maintain a Provincial House in Liberty, Missouri with a dispersed community of one Bishop, 60 priests, and four brothers. Father Garry Richmeier C.PP.S is the Provincial.  Currently, there are two other Provincial Houses in the United States.